The twists and turns in this story are extraordinary and this is only the beginning.

Apparently, a member of the leave campaign thought it so unlikely that it would win he posted a parliamentary petition formalising the conditions that might trigger a 2nd referendum. This was about a month before the referendum itself. The timing is important because it validates the independence and structure of the petition. 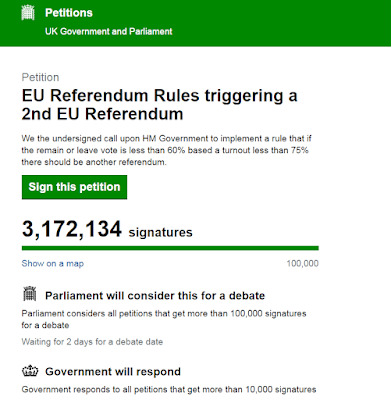 Of course, the boot is now on the other foot, the leave campaign has won the referendum and are desperate not to have a rerun. Members of the “Remain” lobby (which includes me) are delighted that we have a ready made vehicle through which to voice our concern over the result.

At the time of writing there are over 3 million signatories to the petition. Any petition with 100,000 signatories or more must be considered for a parliamentary debate. If I interpret this correctly (I am a retired civil servant, with experience of parliamentary procedures), that does NOT mean that a debate on the floor of the House is inevitable. But the sheer numbers of signatories will apply pressure for a debate to be held, however inconvenient. It could be timed, however, so as to make it irrelevant. I hope not.

Curiously, I doubt that a second referendum is the right answer. Let me speculate over the whys and wherefores of the history of this current disaster. The UK government 2010-15 was a coalition between the Tories and the Liberal Democrats (LibDems). The LibDems were profoundly supportive of the European project and the UK’s membership of the Union. Towards the end of that parliament it looked extremely unlikely that Tories would have an outright majority for the next 5 years.

I suspect that the Tory manifesto, which included a commitment to a referendum on Britain’s continued membership of the EU, was built around the expectation that,, under a coalition government, such a commitment could never be implemented. It certainly looked fairly irrelevant to those of us who viewed the manifesto from the outside.

What I had not understood was that the Scottish independence debate and referendum had changed the political landscape profoundly, even though the referendum itself kept Scotland within the UK. This, along with several other important factors, contributed to the outright majority enjoyed by the Tories following the 2015 general election. But supporters of the EU, still did not recognize the very real dangers embodied in the commitment to a referendum.

Our Prime Minister negotiated a deal that gave the UK more wriggle room within the EU. We can argue over whether this deal was useful or meaningful, but what is now certain is that the deal was completely irrelevant to the outcome of the referendum.

The expressions of frustration, which were interpreted as a vote to leave the EU, were far more profound than this. It's open to debate as to extent that these frustrations were associated with our membership of the EU or the direct responsibility of our UK government or simply the world economic climate or any number of other factors. While some of the expressions of frustration were indeed associated with EU membership (e.g. free movement of labour within the EU), the vast majority weren’t.

I am now convinced that the circumstances, under which the referendum was held, were wholly anathema to the conduct of an appropriate debate. We are left in a position where we have voted for a political plan of action which has no substance whatever, simply because of the frustrations associated current circumstances.

Is this sour grapes of a voter who lost the argument? Well, I’m certainly pretty sour over the result, but, frankly, I feel we have stepped into the unknown without a proper debate. By a proper debate I’m one in which the arguments are written down and proponents held accountable for the rationale that they have advanced. My personal view is that the outcome of the referendum should be debated in parliament and that parliament itself should take full responsibility for the decision it takes.
Posted by swaatacba at 05:06