This year, Patrick and I took our summer break just before the solstice. As usual the Walberswick caravan site was almost empty of holiday makers. This suits our naturally anti-social characters admirably.

We tend to arrive a tad late on this first day. Bryony drives us and makes sure we get a decent meal; in this case chilli con carne and lots of it. She has a poor opinion of my cooking skills. Bryony then
snaffles the car and leaves P and I to fend for ourselves.

Organizing both ourselves and the caravan takes a while. Our ready made meal is very welcome. After this a postprandial walk is essential. The sun has dipped below the horizon but twilight makes seeing easy. Even so I took a torch, just in case. I headed to the beach. The tide was high, but the temperature was no more than moderately warm. I wasn't tempted in.

Walking along the top ridge of the dunes, I headed towards the track in land where we often find samphire in the standing pools. I couldn't spot any this year, but the light was fading.


You can see from the map above, that there' is a footbridge over the Dunwich River. The path leads to a dyke between two drains. The drains eventually connect with the main river, leaving the walker the task of crossing them at the connecting point. Fortunately, this crossing was aided by a narrow (6") plank about 10 feet (3 m) long. This challenged my failing balance, but I made it with out losing my footing.

The official path turns north, but this is both wet and difficult to see. Walkers have created a new passage along the the bank of the river. This has the advantage of being both higher and drier. Another path to the campsite still crosses the reed bed, but is much drier than the official version. Reed beds can be very tall. I was pleased to have my torch to light the way.

Caravan life is like camping. Your sleep patterns take a while to adjust. I woke shortly after dawn and slipped out for a sneaky piss in the open. Come to think of it, this has been a habit of mine since I was about 8 years old. After 60 years practice, I'm conversant with the precautions needed to stay unseen. Four or five years ago I might set off for my early morning walk immediately. As it was bed beckoned for another couple of hours.

Eventually, I rose, dressed and consumed my early morning "instant" around 06.15. (Bryony insists on the reference to "instant" to distinguish it from her real coffee.) You cannot really tell what walking conditions are going to be like, so walking boots are a necessity.

Just beyond the caravan site, a footbridge leads to the Walberswick summer campsite and beach huts.

At this time of year the campsite is empty. It has that serenity which marks its popularity during the six weeks of the school holidays. Although, its very popularity tends to undermine the feelings of serenity.

Walberswick's beach is mostly gravel. A short walk along it, no more than 300 yards, reminds me how heavy going beach walking is. It is a popular resort for those in the know. I spied one lone swimmer and a group of older swimmers in their bathrobes. As ever such groups are surrounded by a gaggle of dogs. Walberswick is one of the few resorts that doesn't ban dogs from the beach.

A cutting through the dunes gives a give view to the eccentric beach dwellings on this side of the Blyth River.

To get there I have to re-cross the Dunwich River which joins the Blyth just before spilling into the sea. This is rather aptly known as Wally's Bridge. There is a sign to dog owners to keep their dogs on a lead, since 8 have already fallen in the river. Perhaps the dogs should pull their owners in after them. 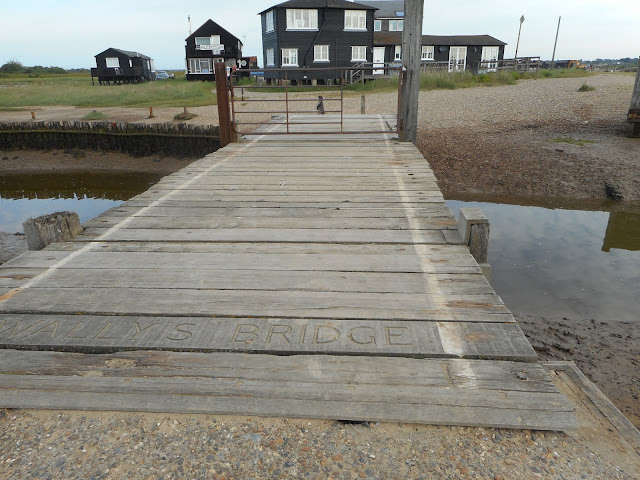 Through the beach dwellings, I came to the Walberswick ferry. It is still a rowing ferry. At that point I looked back into the village and spotted the Bell Inn; our favoured watering hole in Walberswick.

The walk inland up the Blyth River is always a joy. Over 25 years ago, Rodney and I bought an open "day boat" together with an outboard motor that was rather too small for the job. Extraordinarily, we  managed to fit both families into this craft (4 adults, 6 children) and voyage down the Waveney from Geldeston Lock Inn. Although, we survived this experience, it was not to be repeated with such a full load.

Rodney and I also took the craft out from the Walberswick slipway. It was on an ebb tide, so going out was easy. It was an interesting, almost frightening experience coming back in. What we really hankered for was a fishing boat with inboard diesel engine. The boat below would have had our friend, the late Rodney Banks, drooling.

Near the ferry station, I had waited for an older couple (mid 70s may be, but who can tell) who were speed walking/jogging down the river path. To my surprise, I meet these two again as I walk away from the Bailey Bridge. How much further had they traveled  than I and what was their route? I had gone just over half a mile (0.92 km according to my mapping). An equivalent route through the village would have taken them over 1.6 miles. The map below shows the probable route, but it's only a guess. I have included a possible alternative painted in yellow.

Notwithstanding, my flirtation with agriculture as a student, I have next to zero knowledge of flowers (or plants of any sort). The following pictures were taken in well shaded tall shrubs, bushes and bracken next to the path. The first are of foxgloves, but I have no idea of the other two. Any thoughts? 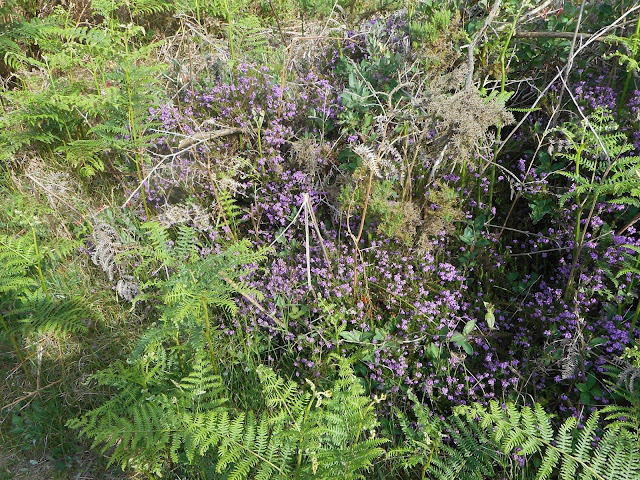 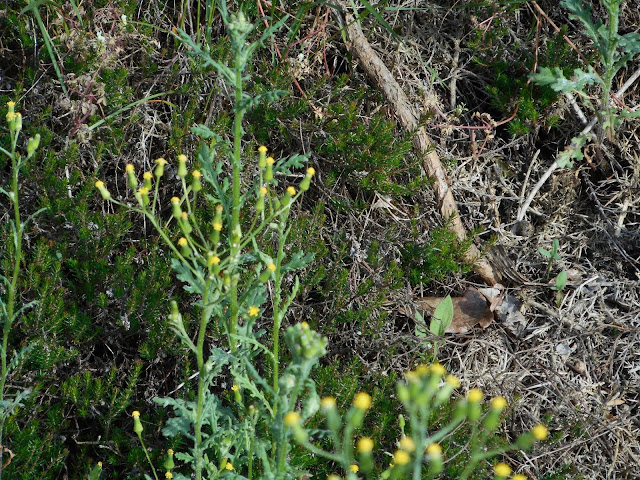 It is just after 8 am, and I'm taken by surprise at the first sounds of motor cars on the road out from Walberswick.

At way mark 10 of the route map for this morning's walk, I query the existence of a bona fide footpath. It is not shown on the OS map for the area.

However, there is an official footpath sign (I should have taken a photo) and the picture below shows the track that I followed. I wonder if the farmer disapproves.

I return to the caravan just after 9 am, definitely ready for breakfast. But I have forgotten to bring the muesli. Irritated and tired, I trudge off to the Tuck Shop. There are sounds of doubles tennis being played behind a thick hedge; all women - too early for men? There are very few poppies this season, but here were some.

We normally reserve Tuesday for a fish meal, but I am feeling lazy and, in any case, thunder storms are forecast. We are both delighted that Bryony has provided more than enough chili for two meals. In the meantime, I attempt to finish off Robert Galbraith's "The Cuckoo's Calling". Under this pseudonym J K Rowling allows her imagination for devious plots together with very real and imperfect characters full reign.

Patrick tells me that between 1 and 2 am we were treated to sheets of lightning. He was fascinated but not very comfortable. Typically, I slept on until the need for an early morning piss.

The usual healthy breakfast: fried bread, fried eggs and fried sausages. Can I hear Bryony screaming from afar. "What about your bloody stroke?" I finish Robert Galbraith, so it's time to buy fish. It has been bright and warm since 8 am, but the weather is not forecast to last.

We take the Walberswick ferry across the Blyth River to the Southwold side. In this tiny fishing port, you are entirely dependent on the night's catch for the variety of fish available. The variety at the first stall was not inspiring. I was really looking fresh mackerel. The second stall is closer to the Harbour Inn and is often my preferred outlet. It has rock eel. The stall holder advises baking in foil for 18 - 20 minutes.

On our return I spotted my ideal fantasy for a life at sea. Fortunately, finances prevent me from indulging this fantasy.


At last I get my chance to drink at the Bell Inn. Two pints bitter shandy was not quite what I intended and I certainly paid for it later in the afternoon. Patrick is in talkative mood and we cover learning about statistics, activities post OU degree and communications with the DWP. This last was unusually constructive. They were certainly not hassling him over the period between the end of his current OU module and beginning of the next. In this is it was about 6 months.

The rain returns in the afternoon, so I grab my second novel. This is a first birthday present from Guthrie in, probably, two decades, but it is also the first time he has been at home over that period. "Dead Heat" is by Dick Francis and son Felix. Intellectual stuff hey!

The evening meal of baked rock eel is exceptionally good, but I wish I had rubbed the fillets with garlic as well as rape oil and lemon. The rain continues as we go to bed.

The weather is bright but the ground and plant cover are very wet. I decide against a morning walk. Dick Francis awaits. Our hero is the usual almost clever bod who is being hassled by unseen baddies.The main interest for me was that the putative girl friend for the hero was a viola player and freelance head of section for the RPO. The artistic highlight of this romantic interlude is a performance of Elgar's Enigma Variations.

These Variations contain a couple of short solos for the lead viola. I note that this was not mentioned in the book, despite the fact that our hero went to see his beloved perform twice. Curiously, I had the privilege of taking these solos in Great Yarmouth Minster on 15th June. 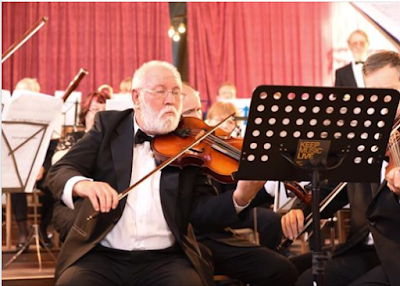