Last weekend our house was full to the gunnels. My brother Russell was visiting for a couple of days and I decided that we two should escape the crowd. I had always intended to walk the Boudicca Way, a medium distance walk of nearly 40 miles. It breaks up fairly neatly into 4 sections. We would trial section 2.

Photographs of the relevant OS map sections below show the walk we should have taken below. In practice our planning went awry.

Fortunately we have public transport between Harleston and Pulham Market, which was the beginning of this stage. Perhaps our first mistake was to rely on maps downloaded from the web rather standard OS maps. In fact Russell had handwritten our route onto A4 sections of an OS style Map  For an example see below.

It was a warm summer day and the first part of the route went smoothly. I even had the presence of mind to take a snap of a rather interesting wooden footbridge.

Woods and forests are always tricky to navigate and Tyrell’s Wood is no exception. The navigation was not made any easier by my attempts to avoid the extensive boggy patches, which formed after the recent heavy downpours. We re-joined the official route about half way through the length of the wood, I confess this was more by luck than judgement.

Once through the wood we met up with one of the myriad of small roads that meander the East Anglian countryside. We should have turned right off this after about 100 yards. We missed it. In fact we were looking left rather than right. By the time we had reached one of the many back roads into Long Stratton that I recognised, I knew we were wrong. Fortunately we were close to a junction with both roads named. There’s a rarity.  I was able to locate our position. We turned towards the authorised route.

Russell however was still not convinced I was right. I suspect the “little brother syndrome”. We found ourselves heading towards a wooded area on both sides with signed footpath heading left (north).


This footpath was clearly marked. Inevitably we reached another. My guess was that turning left would lead to Long Stratton. We agreed that the right turn was a more profitable direction.


So it turned out. Although we didn't know it the time we were back on the official Boudicca Way. Perhaps more to the point we turned left at the triangular junction, which meant that we were indeed heading for Tasburgh.

Our next error was fatal. We knew we had to turn right off the route and came across a likely candidate as shown below.


This picture above has been taken from Google Maps. When Russell and I saw it there was a chain across the path with lots pretend notices on it. Nothing actually said that this was private property but the implication of the chain together with the fake notices suggested it was. Both of us looked around for any official notice to show us that this was indeed the official Boudicca Way. We found nothing and assumed that this was not the turning we were looking for.

We went along Brick Kiln Lane. There was no sign of the authorized route and by the time we arrived at Church (yet another route to Long Stratton) I was getting tired and hungry. The need for food overrode all other considerations.


The Queen's Head was very welcome, together with Fish and Chips from the chippy 20 yards down the road. I very rarely drink cider, but the pint of very dry cider from the Aspall's Brewery (brewed in Suffolk) was exceptionally welcome. Sadly the pub was due to closed its doors permanently the very next day. This part of English life seems to be disappearing.


It's surprising what refreshment can do. We decided to work out way back to Tyrell's Wood in the hopes of finding where we made our original routing error. Eventually we returned to the point on our route where we should have turned off. Perhaps it was not entirely our fault. The growing season this year has been has been warm and wet. Everything is overgrown and the sign post for the correct route was more or less invisible.


Through Tyrell's  Wood we took yet another route. I still have no idea which the correct route is. Once through the wood we turned right (off Boudicca Way) and headed for tea and cakes at Goodies Farm Cafe.

There is no doubt that we made a lot of mapping errors on this walk, But I wanted to find how much of a difference it made to the distance walked, The first map below shows the main mistake and the correct route. 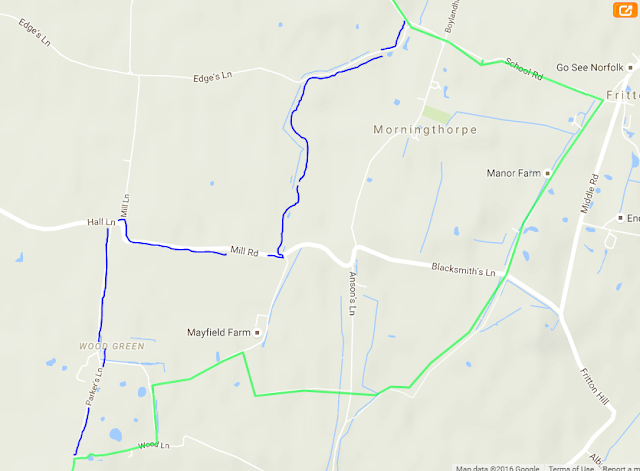 The next two images employ the Google Maps measuring tool to estimate the two distances.

In fact, according to these measurements, we skipped about 2/3 miles. Also we didn't even attempt the last couple of miles to Tasburg. In our defence though, we did walk a further 3.62  miles from Long Stratton to Goodies Farm shop.


My guess is that we weren't far short of the original distance that we intended to walk.