Cla taught me how to swim aged 6, after I had tried to drown myself in the Thames at Runnymede. At that point, the floor of the river shelved after sloping gradually and then shelved suddenly. Typically, I stepped off the shelf straight out of my depth. I’m told Cla dragged me out and I was given an ice cream to assuage the fright. Somewhere there is a photograph of me with face and hands covered in ice cream as proof of survival. But it seems I had acquired the habit taking unexpected dips.

Sixty years later, Bryony and I were picnicking with Meredith and her two daughters Molly (pictured below) and Nuala. We had chosen a spot on an island in the River Waveney near Bungay. Molly is learning to swim and has very nearly mastered the craft. Since England was in the middle of an intense heat wave, it wasn’t surprising that both girls insisted they wanted to get in the water. Meredith and the girls were prepared for this with both swimming gear and suitable footwear. I only brought trunks and towel. 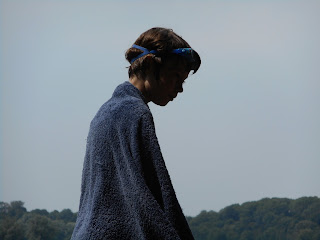 Rivers are tricky, as I know, and Nuala is only 4. She insisted on being held by Meredith. This left me with the responsibility of getting in and looking after Molly.

I got in very gingerly. The river was not deep there, only up to mid-thigh, but the river bed was full of sharp unexpected objects. Curiously, I had expected my balance to improve because of the support of the water. This was a major misjudgement. Within a few minutes I had spilled inelegantly on to my bum.

So I was completely wet. I may as well tackle the swimming bit. Breast stroke was OK, but pretty exhausting. Obviously the fitness levels for my upper body are poor. Front crawl was almost impossible, since I tended to clockwise circles. Perhaps this wasn’t surprising since the stroke had demonstrated a tendency to right sided paralysis.

Still I was able keep an eye on Molly. Next time we’re at Walberswick, I really will go in the sea with Meredith and the girls.
Posted by swaatacba at 01:41