At first I was amazed at how quickly I became tired, My balance, which had never been brilliant, was totally non existent, My first aim was to walk around the Recreation Ground, immediately behind our house. This was a couple of weeks after being discharged from hospital.

The First Attempts
It's not far around the Rec, half a mile at most. At the first attempt, I cheated and cut across the narrow bit in the centre. On the far side there is a cycle track with humps, bumps and steeply banked corners. Initially, this defeated me completely, even on foot.

A depressing start, but the very next day I got round the whole Rec and walked the cycle track. For me, things improved very quickly, but it was clear that I couldn't over extend myself.

The next challenged was to become useful - rather than simply a recovering invalid. The shops in Harelston aren't that much further than circumnavigating the Rec, But I had to limit the amount of shopping.

After 4 weeks, I could go to the shops provided I wasn't daft about the amount I carried. One of the oddities though was that I wobbled. I was like falling of the edge of a kerb where no kerb existed.

Getting into the country

Bryony and I have always enjoyed walking and I was determined to expand my ability to handle longer walks as soon as possible. When we had Tatty (our Jack Russell Terrier/Lhasa Apso cross), her regular was along country paths and tracks to the next village Starston. A month had passed and I felt ready to attempt this. 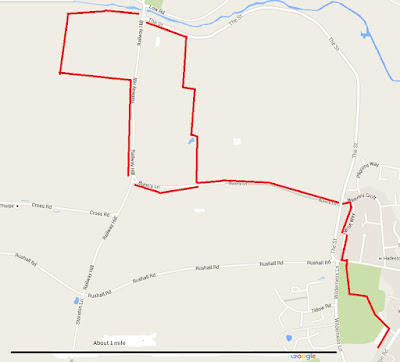 This is pretty gentle walking. We are out of the town envelop within half a mile. The road (Bunn's Lane) running east - west from the edge of town has been converted into a path along which bicycles are also permitted.

It runs in between farmland. The large field to the north was, until very recently, cultivated as a rose nursery. The flowering seasons for the various cultivars was extraordinarily long.

My path turned along the eastern edge of this field until is crossed the old railway line from the Pulhans and Norwich. This is one of the legacies of the Beeching cuts. So many of our old railways ran through pristine country.

We go onward towards a stand of firs destined for Christmas trees, but not for many years. There is a gentle slope down to the road to the Pulhams and the Beck. The road crosses the stream and to the hamlet of Starston, but we stay on the south side. This is an unenclosed meadow. It is not cultivated in the true sense of the word, but the farmer does take a hay crop a couple of times a year. It is, however, subject to fairly frequent flooding. The tractor wheels leave deep and irregular ruts on the ground.

It was pretty wet on this first assay after my stroke, Given that my balance was fairly hopeless, I was lucky to get through this bit without falling over.

Turning north, we reach the old railway line again and follow it until reaching a small lane from Startson. This lane takes us back to the far end of Bunn's Lane. At this end of the lane, there is always lots of fairly deep barking. There are at least three dogs involved but I've never been brave enough to take a look. From here, I would guess it's just under a mile back home.

The whole route took considerably longer than an hour. Before, even when walking the ever inquisitive Tatty, it took much less time than that. Still it was a start.

The Trial of Stamina

Even though I'm generally lazy, it never occurred to me that I couldn't walk 7/10 miles if I wanted. After all I had walked from the top to the bottom of the Grand Canyon aged 11 (about 16 miles). Admittedly it was half a century earlier, but that confidence was well and truly shattered. I needed to test my walking stamina again and soon.


This was certainly a challenge. I estimated that it was just over 7 miles. This part of Norfolk isn't entirely flat, but most of the slopes are short and gentle. I wasn't going to be challenged by steep gradients.

I started with the short walk through the town. Harleston is quite old. There are many passages and footpaths that allow one to avoid most of the main roads. Over the bypass the countryside proper begins, The footpaths wriggle around the edges of fields towards Redenhall.

Curiously, our parish is called Redenhall with Harleston. Clearly, when the parish was named, Redenhall was by far the more important of the two and appears in the Domesday Book, It certainly has a much more beautiful parish church, but Redenhall itself is barely more than a hamlet. The church is used for concerts as well as the traditional religious services. Harleston, though, seems to have always been the commercial centre, It has been a market town since at least 1369. The Market Place remains functional. Bullock Fair is an open car park and Budgens supermarket.. There is also a designated common, though this is somewhat distant from the town centre. I'll pass the common towards the end of this walk.

Through Redenhall and my route re-crosses the A143 (Bury St Edmunds to Great Yarmouth road). This is the start of a period through very gently rolling country, The Gawdy Hall Estate lies immediately to the north of my route for a couple of miles. I then meet the backroad into Harleston, but walk away from the town towards Startson.

Starston is tiny (like Redenhall) but its residents seem to be much more active. The local estates office premises have been converted into an a business community. The parish church is very active and the local residents have acquired some acreage adjacent to the Beck as a play area community resource. My route, though, turns north, to Skinner's Lane which leads to a couple of farms and associated cottages. This is a major deviation and adds significantly to the length of the walk. The route here forms three sides of a rectangle eventually crossing the back road between Harleston and the Pulhams.

Over the road and through the inevitable chicken sheds (they spring up everywhere) I cross the Beck bearing towards Harleston. But not before going through a farmyard with much barking from highly excitable dogs.

I had chosen my route carefully so as to extend the walk without running myself completely into the ground. Nevertheless, I had forgotten the narrow log bridge I had to negotiate. I was tired and a recurrence of the lurch seemed inevitable. I braced myself at one end, then made the 8 feet across without mishap.

I return to Harleston proper via the Common. These days it is no more than a small triangle grass and a few trees. From here to the Recreation Ground and home is but a few minutes. I was exhausted but pleased.

My annual holiday with Patrick (my eldest son) at the Walbersick caravan site was assured. I had enough energy and stamina to enjoy the pub, the harbour and the reed beds. Somehow it did not seem likely that I'd brave the sea.
Posted by swaatacba at 12:07