About a week ago I attended a workshop for orchestral instrumentalists organised by the Pulham Village Orchestra (PVO). These are biennial events and I attended my first in 1988, when my own children were all 10 or less.

This year the study pieces included Vaughan Williams, Symphony No.8; extracts from Hansel and Gretel, Humperdinck (including a couple of songs) and overture to Semiramide by Rossini. I expected the Vaughan Williams to be very challenging and indeed it was. After three fairly full days of rehearsal work, both as a whole orchestra and with tutors for individual sections we gave a performance. This time three generations of Allens and Walshes attended the concert. 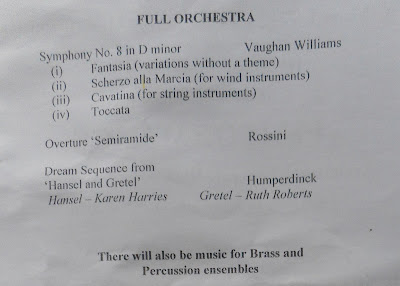 Bryony, Meredith and Simon had their work cut out keeping Molly (8) and Nuala (4) from causing disruption, but they managed it. At least I didn’t notice anything untoward from the depths of the viola section. However, the order of the concert was geared for the benefit of the amateur players and our powers of concentration, rather than the audience.

The Vaughan Williams Symphony came first. It was something of a struggle for both audience and players. However the 3rd slow movement for strings only came over well. It certainly attracted Nuala’s attention. That’s quite a feat for a four year old.

Everybody enjoyed the singing in the Humperdinck but the purely orchestral parts did not come over as well.

Molly’s attention was really engaged by a recently composed duet for percussion. Unfortunately, neither the details of the performers nor the composer were included in the programme. I’ll try and locate these details over the next couple of weeks.

The Rossini overture was also attractive for both the children. Even so, I gather that their attention was beginning to waiver. From their viewpoint it would have been better received at the start of the concert (as implied by its title).

Molly and Nuala were by no means the only youngsters at the concert. It is important that they hear presentations of all sorts of standards. They will be much better able to appreciate what’s really good later on.
Posted by swaatacba at 04:52