For me it began at home. Cla played popular songs from WW2 and Stephen Foster songs from the US on the piano. These were my earliest musical memories, caught on the verge of sleep. Setting dates to early memories is really difficult, but I guess these were when I was between 5 and 8 years old.

Curiously, I never remember my two eldest brothers at piano practice, I guess they must have learnt although neither of them play now. My closest brother, David, is a different matter. David is 5 years my senior. An age gap where the younger sibling can be real nuisance. I fitted that category to a ‘T’.

Initially, David took piano lessons from a teacher near his school in Hendon. While I certainly heard him practice, it made no impression on me. As I reached 10, my father wondered whether I would take to having lessons myself. David at that time was having lessons from Dennis Page at home. Dennis lived in Harrow and arrived at the house on a moped. It’s curious how these memories stick.

There was some doubt as to whether I had either the talent or was suitable for teaching. It turned out that I had very little talent, but plenty of energy and interest in music. When teaching young children that counts for a lot.

The initial stages must have been difficult for Dennis, but over the course of time I learnt my way around a keyboard. Reading music, and in particular sight reading, never came easily. Here my elder brother David was an absolute boon. He, of course, was practising a way at his pieces while I listened. This was not an intentional or surreptitious listening. It was simply part of life at home. I confess, however, when I got bored with practising my own pieces, I grabbed his and learnt them.

This was a cause of deep irritation for David. I gather he complained quite forcefully to Cla and Rose. But I was not very controllable and, in any case, whole episode was one of the primary reasons that I learnt to read music effectively. I have benefited hugely from this learning, in particular from the intimate knowledge of both the base and treble clefs. I still play the piano, albeit, very badly.

Dennis and his sister were both music teachers. Together they provided a platform for us young students to present our progress in performance. I remember being driven to Harrow and waiting with lots of other would be pianists (and the occasional violinist).

One of the most nerve racking experiences was the wait until I was called on stage. We young performers were in the wings of a theatre stage, trying (and in my case failing) to remain calm. I remember going through this process at least twice. At the last of these, I performed the “Gypsy” rondo from one of Haydn’s piano trios arranged for solo piano. (I still have the sheet music in my library of piano music.) Although it looks simple, it really isn’t.

Here I show images of the initial bars of the rondo up to the first recapitulation from two different sources. The first is 18 bars long and the second 26 bars. Broadly speaking rondos have standard structure of A – B – A – C – A. Second source shows the full rondo structure in its full glory, while the first is adapted for students at around grade 5 and entirely misses out two of the sections as well as some of the elements of the musical development.


I highlight below some of the more interesting sections omitted from the student version. 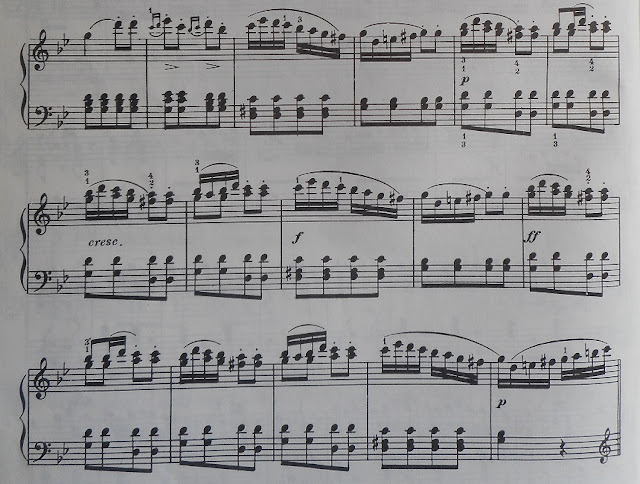 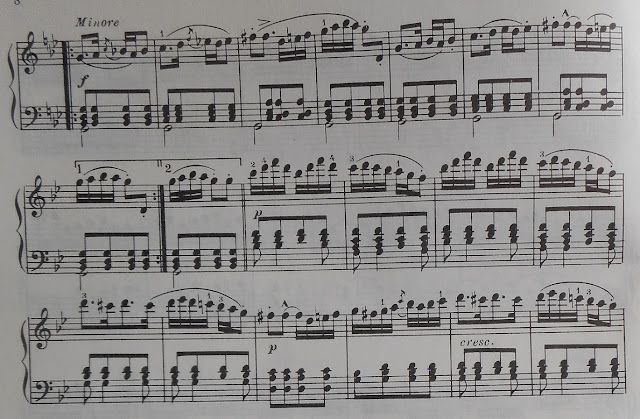 Note the rather tricky rhythmic passages in the left hand of the second passage. I have certainly never managed this effectively on the piano. But this is taken up by the cello in the trio version and is much easier.

Notwithstanding that I eventually became a committed atheist, I attended church at Mill Hill until I was 16. Curiously, my weekly dose of hymn singing made very little impact on me. However, I was asked to accompany small children on piano at Watling Free Church during my later teens. This meant that I had to come to grips with a new hymn more or less every other week. This requirement to lead the children in, and to persuade them to sing with me was a very useful skill.

Although perhaps the most useful skill was being able to fudge the difficult bits. I’ve applied it ever since.
Posted by swaatacba at 04:53