This blog post is about the modelling of Sudoku naked multiples in Excel. It concerned with the user input / decisions and how the model uses this information to evaluate its validity in respect of the puzzle in its current state.

The concept of naked pairs, triples, quods etc and how they operate in Sudoku is best explained by experts. I suggest Hodoku or Kristanix. The web sites address the issues from slightly different perspectives but both are very clear.

Sudoku  has three dimension (row, column and sub-grid). Naked multiples operate in all three of the dimensions, but can only be evaluated one dimension at a time. In this model the first user choice is to decide on the dimension he wishes to investigate.

This registration process calls a copy of an incomplete Excel template and creates a model for solving a discrete element of the Sudoku puzzle. The user must link the template to the original puzzle and the latest state of play for the puzzle. (It is not strictly necessary to link it to the original, but it makes the presentation easy in terms of identifying progress made.) The initial view of the working paper is shown below. It is identical in the cases of each of the three dimensions.

From here forwards,the spreadsheet presentation depends on the dimension
orientation of the template that you initially selected. The choices range from 1 to 9.

While for row and columns it is obvious which row or column number to choose, it is less so for the sub-grid numbering, The sub-grid template includes a numbering layout.

This explanation has a starting point equivalent to column 6 in the Sudoku grid above. The picture below shows the same column picked out for detailed analysis. It highlights the Sudoku identities 3, 6 & 8, which, in this case, make up a Naked Triple. The player must mark these 3 Ids with a "Y" in the green input grid.


The remainder of this worksheet is given over to validation and analysis.

This evaluates whether the player selected a bona fide naked triple and, if so, considers whether it leads to a solution of one or more cells. In keeping with many non numeric analyses the logic can be long winded. The diagram below marks each of the analytical groups of cells or ranges with an identifying letter.


In theory, the player can undertake more than one naked multiple analysis within a single dimension consecutively. The Excel model permits this but only if there is no clear result from the first phase.

In this case, we did generate a clear result in the 8th row of the column under inspection. This is shown in the output Sudoku grid.

The processes involved with naked multiple analysis by Row and by Sub-Grid are identical, but their shapes on the Excel page look different to take account of the orientation within the Sudoku puzzle. A diagram of the Sub-grid page shows how different the Excel sheet looks. 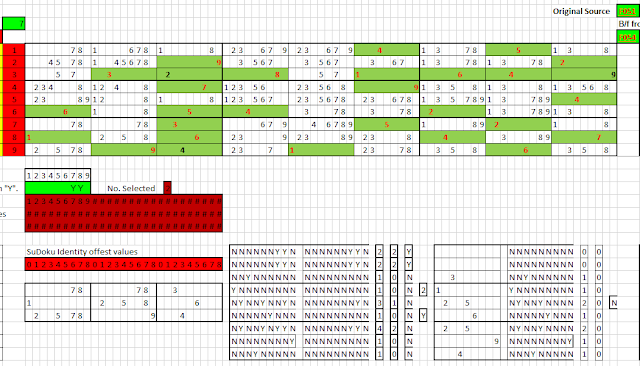 Note that this analysis, although successful in showing surplus Identities did not deliver a final result.