Saturday, 4 February 2017 and the Guardian reports how the EU leadership criticise the US president for his ‘lack of respect’. Earlier this week Jeremy Corbyn had placed a ‘3-line whip’ on Labour MPs to support the 2nd reading of the European Union (Notification of Withdrawal) Bill. Quite a number defied the whip but not enough. Typically only Ken Clarke from the Tory side voted against.

It is sad that so many of the UK’s MPs have forgotten that they were voted into Parliament to act in accordance with the views they presented at the General Election 2015. Of course they are entitled to change their mind, but they must be convinced of the rationale for changing it. I wonder whether they are following what they believe to be the voter arithmetic rather than being persuaded by the argument. If that is the case, they have failed fundamentally in their duty as MPs.

But enough of all that. Hard Sudoku is what this blog is about. I tried the Guardian Sudoku puzzle (No. 3663) and recorded my progress. This record uses the methodology developed in MS Excel about 10 years ago. The methodology is quite weird and long winded but, in this context, it is useful for explaining how and why I got stuck. I describe below the argument I employed for getting unstuck. 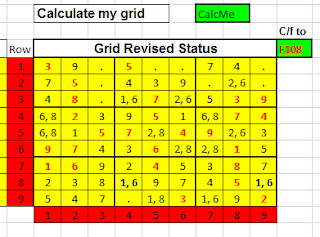 I had got as far as here using conventional arguments and methods. Assuming no mistakes in recording, this would represent a valid solution thus far.

The record shows that I had reviewed all the unsolved positions in the puzzle without making any further progress. This also covered the examination of individual Sudoku Nos. and their relative positions in each of the 3 dimensions of the puzzle. There were only four numbers left (1, 2, 6 and 8) and the reasons for not making progress bears some examination.

Both Id’s 1 & 2 have a combination groups of three such that one group is solved completely and at least one other group where two positions are known, but not the third. Unfortunately, the information in the opposing dimension does not help us limit the position of the 3rd ID. For ID 6, there is altogether too little information to make further progress.

ID 8 has 2 groups of three where the location of two of the elements is known. At first glance, the unsolved positions in the first column at rows 4 and 5 look the most promising. After all the sub-grid at the bottom left hand corner is solved completely and the sub-grid immediately above it has only these two elements unsolved. Nevertheless, no amount of examination has revealed a logically provable determination as to which cell should contain which ID.

I’m left with considering the position of ID 8 in the bottom 3 rows of the puzzle. At first glance this looks considerably less promising than the column 1 vacancies discussed above, especially since there are 3 unsolved ID positions for row 9 (see the values highlighted in green below) rather than the just two for column 1. However, in my solution methodology, I highlight cells where the possible solutions is limited to 1 of 2 IDs (see the cells circled in red).

The information available to us is therefore is


I conclude therefore the cell named 8_49 in row 9 must contain the ID value 8, since that is the ID value left for this column.

This is something of a tortuous argument but it seems to work. Any thoughts?

Posted by swaatacba at 10:13 No comments: